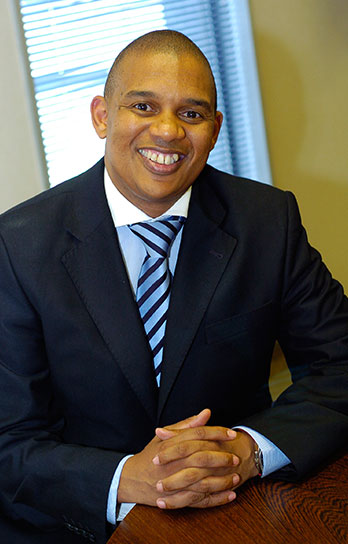 Lincoln Mali (46) is the Regional Head, Western Region, Personal and Business Banking Africa. He is responsible for Angola, DRC, Ghana, Namibia and Nigeria.

Lincoln holds a BA (1990); an LLB (1992) from Rhodes University; an MBA (2006) from Henley Management College in the UK and Advanced Management Programme (AMP 2013) from Harvard Business School in the US.

Lincoln started his professional career as a Candidate Attorney at Cheadle, Thompson & Haysom in 1993 and then joined the new South African government in 1994 as Ministerial Spokesperson and Advisor to the then Minister of Education, Prof SME Bengu. In 1997, he joined the Banking Council SA as a General Manager responsible for Public Policy, SME Development and Market Conduct Regulation.

He joined Standard bank in 2001 as a Senior Manager at Corporate & Investment Banking (CIB); in the same year he was appointed Regional Director: Central Africa, in charge of Standard Bank Zimbabwe, Zambia and Malawi. In 2003, Lincoln was appointed Director: Convenience Banking, which made him responsible for Standard Bank’s low -income strategy which included the launch of the Mzansi product and the extension of financial services to previously disadvantaged areas through building branches and ATM’s in townships and rural areas. In 2005, Lincoln was promoted to Provincial Director: Gauteng Province. In November 2007, Lincoln was then appointed as Director: Branch, Business and Private Banking. From the 1st of August 2008, Lincoln assumed responsibility for all the bank’s Customer Contact Centres (Call Centres) and on the 1st of January 2009 assumed responsibility of Self Service Banking (ATMs, Internet Banking and Mobile Banking) as Director: Customer Channels. From 1 February 2013, Lincoln was appointed as the Regional Head, Western Region, Africa. (Angola, Ghana, Namibia, Nigeria)

Lincoln’s varied previous board memberships include the Council of Technikon SA, the Financial Services Board’s Insider Trading Directorate, Stanbic Zambia and Stanbic Zimbabwe, Commercial Bank of Malawi, Eduloan and the Institute of Bankers.

Lincoln has been married to Sva for 16 years and has three children. He enjoys spending time with his family, watching sports with friends and travelling.