A Tribute to Dr Sindisile Maclean by Lincoln Mali 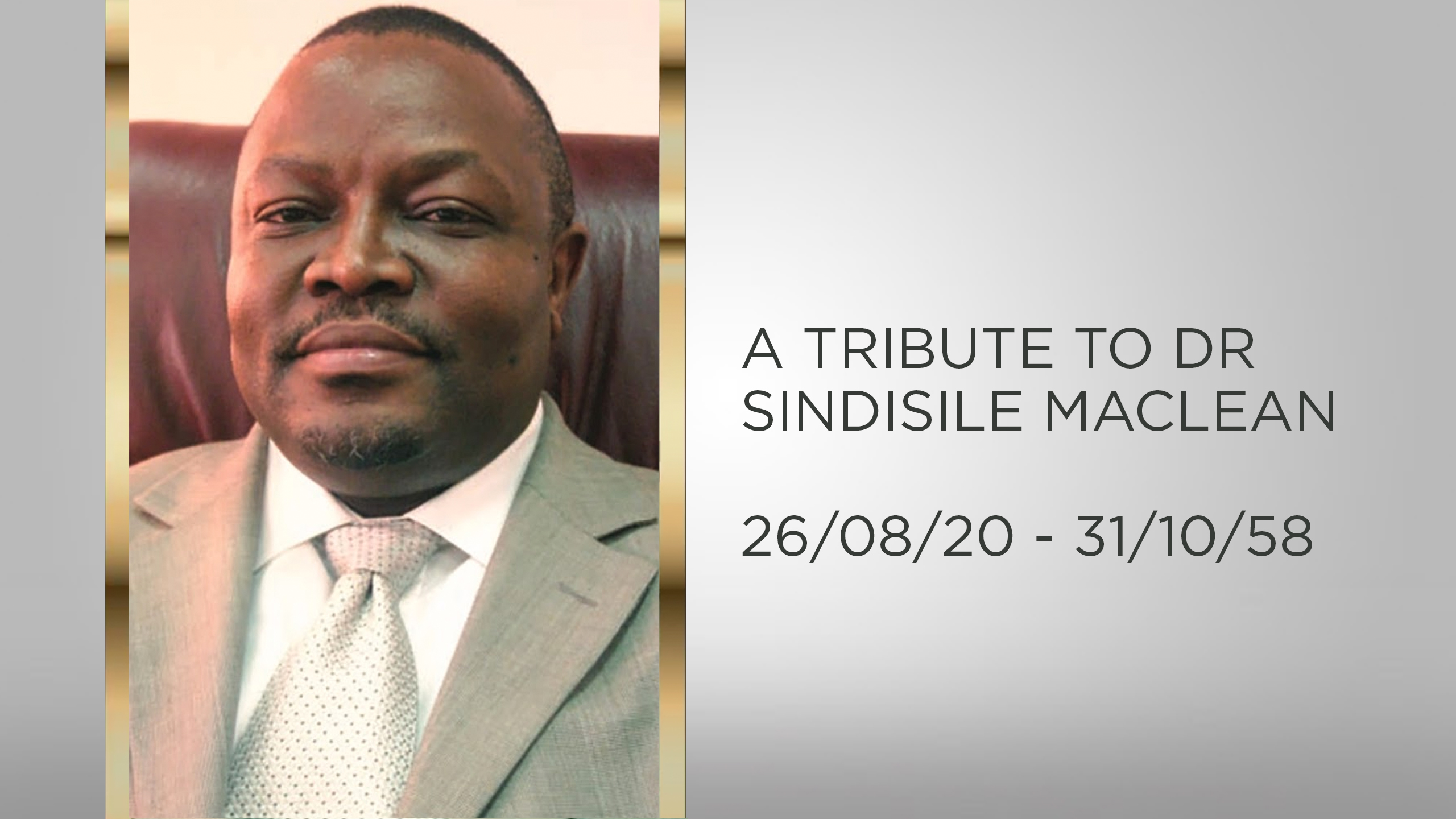 The Eastern Cape was blessed with some of the finest thinkers and leaders such as Charlotte Maxeke, Victoria Mxenge, Govan Mbeki, Chris Hani, Oliver Tambo, Nelson Mandela, ZK Mathews, Tiyo Soga, Steve Biko and many others.

President Thabo Mbeki saw the need to preserve this rich legacy, in his address at the ANC NGC in the year 2000, “ We have to ensure that students, youth, professionals, and the intelligentsia either have or will have specialized skills our country needs, at the same time have the levels of national consciousness and patriotism that will enable our people to count on them as an asset for the development and modernization of our country, for the benefit of the masses of our people.”

Where are those people with specialist skills, special talent, who are patriots, and who are assets to the country today? Instead, we are a public outcry about those who are looting the resources of the state, those implicated in wrongdoing, and those involved in corrupt business practices.

19 years later, in his foreword to Mteto Nyati’s book, “ Betting on a Darkie”, President Mbeki painfully returns to this topic and reaches a far reaching conclusion; “ What I have said makes the plain and simple statement that unless the ANC cleans up its membership to ensure that, at all levels, it is made up of people who respect its value system, and join and remain in the organization with the sole purpose of serving the people of South Africa, our country will fail to wipe out the negative phenomenon of counter-revolution, state capture, corruption and other negatives that have preoccupied our Judicial Commission of Inquiry.

Ladies and gentlemen, we have now lost the kind of development cadre South Africa requires: one who has the skills modern society needs and who is committed to building our country as a viable democracy. Unfortunately, across the country, leadership roles are now more occupied by many activists, with no special skills, or no skills at all, except being a member or leader of the ruling party. Many of these activists/leaders joined the ruling party with the sole aim of furthering their personal careers, they use their positions to amass personal wealth, give jobs and contracts to relatives and friends, and use access to state power to unjustly enrich themselves.

Its tragic that we now have more leaders with the votes, followers, slates, and resources to be elected into office than those with the special skills, talents and track record Mbeki called for. We now have more leaders with the slogans, rhetoric and the motorcades, than those with creative ideas, innovative solutions and the ability to humbly work with communities. It seems, ladies and gentlemen, that the eye of the needle is at its widest, anyone with money, votes and supporters can get through the eye of the needle, “ ucingo luwile”.

Today South Africa has lost a model activist, the ideal community leader and the epitome of civil service, Dr Sindisile Maclean. A model leader in the mould of Nelson Mandela, ZK Mathews, Chris Hani, Tiyo Soga, Govan Mbeki, Charllotte Maxeke and Victoria Mxenge.  Dr Maclean, like all these icons, was a humble South African devoted to education, and therefore the expansion of the frontiers of knowledge.  He was keenly interested in using that knowledge to improve the human condition, and understood and appreciated that his education imposed an obligation on him to “ stretch out his hand to those more disadvantaged than him”. He was the activist we had in mind to go through the eye of the needle.

Maybe because I’m still in denial, maybe because he was a great listener, I would like to talk to my older brother, comrade, mentor and guide, Dr Sindisile Maclean, I man I’ve known and loved for over 30 years. I prefer to talk to him, rather than talk about him.

Rest In Peace, Dr Sindisile Maclean, yours is an example to be emulated.

Leadership is not a title held, position occupied, status achieved, or rank achieved, it is,

You were an embodiment of the finest virtues of leadership, virtues we learnt from OR Tambo, virtues of:

Dlangamandla, when you came to Rhodes, you were already a matured activist and leader with a wealth of community and political struggle experience having been expelled from the University of Forte Hare in the early 80’s for student activism. You were groomed by some of the finest leaders from Ginsberg and the wider Border region. All of us who were at Rhodes in the 1980s can attest to your principled character and your genuine commitment to collective action. You made us proud to claim you as one of our own friends and compatriots.  You have gone through the ranks of the UDF. BSM, AZASO, SANSCO, SATISCO and their Women corresponding structures. You persuaded many to follow suit using your sense of humor and a good, solid and heartily laugh.

On a personal note, I am blessed to have walked a path with giants like you, Chule KK Papiyane, Khaya Giap Mabece, Mvuzo Mbebe in the student movement at Rhodes University. I was honored to be there when you became the national President of the student’s body SATISCO, and enjoyed playing in the same rugby team for our university against your beloved Fort Hare. You were there when our student organization, BSM, was banned, and you organized, with Khaya Mabece and others, for us to return to university and just change the name of the organisation, those meetings were held in the Border region during the holidays.

Mchenge, you were part of the nerve centre for national student politics, our debates shaped and influenced the discussions on the unity between NUSAS and SANSCO to form SASCO at Rhodes university in 1991. Through your guidance, we linked up our student activism with local community struggles and had very close ties with the workers union, lecturers, NGO’s – these links were instrumental in us organizing the biggest march in Grahamstown against apartheid

After the unbanning of political parties, you turned your attention to the development and growth of non-racial sports, with the likes of Mluleki George, Mthobi Tyamzashe, and Smuts Ngonyama.  You were one of the founders of the National Sports Congress (NSC); this became the body that spearheaded the unity talks in sports. The story is not fully told about your role in those unity talks for sports in South Africa. We were there with you, Mvuzo Mbebe, Songezo Nayo, Andrew Druze Dipela, Mangaliso Mahlaba and others arguing strongly with our seniors, Smuts Ngonyama, Mluleki George, Rama Reddy, Chris Machardush, Zola Dunywa, Silas Nkanunu, Makhenkesi Stofile, Khaya Majola, Steve Tshwete and others about the preconditions of sports unity. History has vindicated the positions we took during those debates.

Dlangi, whilst at Rhodes you were instrumental in forging a closer working relationship between our student movement with Border Mass Democratic movement. It was this relationship that continued beyond your student life that shaped your role and contribution in the struggle first as part of the Border UDF and the broader mass democratic structures. You were held in such high esteem that you were elected Regional Secretary of the ANC Border Region leading to the General election of 1994.

When you were the Mayor of Buffalo city, you received recognition, year after year, in the national Vuna Awards Ceremonies. Your city, under your leadership, was not only voted the best city in the Eastern Cape, but was the best city in South Africa, not once but several times. You did it through visionary leadership, service delivery excellence, good financial management and close engagement with the communities you served.

Tolo, after your award winning stint as a Mayor of Buffalo city, you pursued an academic career, and earned your Masters and PHD and proceeded to lecture at NMU. You were not trapped by high office; you were not a slave to sins of incumbency. You could serve in a different capacity, grooming the next generation of leaders. I am sure your students did not know the prominent role you played in our freedom struggle, you were just their lecturer, supervisor, guide and mentor, such was your humility.

Dlangamandla, in any role you played – you played with distinction, tasks you were assigned -you handled with aplomb and people you met – you treated with respect and dignity. Your life example should teach so many of our rulers today that, if serving is beneath you, then leadership is beyond you. You served others with humility and purpose; you were never defined by high office.

Mkhuluwa, you were a devoted family man, you so loved your Ntosh and would always tell us to be “ romantic guys and not be useless bums”. Umfazi uyathandwa onwatyiswe you would tell us. You had such a big heart to love Ntosh and your family, to love your friends and comrades and to love your people.

I hope that your death will not be in vain; that the next generation of young leaders will be properly prepared with regard to the skills our country needs to achieve its goals.

Leadership in the 21st Century with Pastor ...